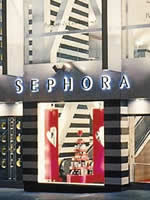 A number of the cosmetics industry's major players have made moves to enter the Middle East market or expand their presence in the region.
LVMH's Sephora is partnering with key Middle East distributor and retailer, Chalhoub Group, to open four outlets in Dubai, Saudi Arabia, Qatar and Bahrain by the end of the year.
The Chalhoub Group, key distributor and retailer in the Middle East with the distribution of brands such as Coty, Dior, Puig and Givenchy and operator of over 60 Faces perfumeries, has joined forces with French luxury giant LVMH to introduce the perfumery chain Sephora in the region.
Four Sephora - in Dubai, Saudi Arabia, Qatar and Bahrain will be open by the end of the year. The concept is going to be the same as in France with a nice presence for skincare and all the services Sephora has. The Middle East stores will offer the same range of beauty treatments and services as Sephora France, such as skin diagnostics, a nail bar, brow bar, makeup lessons, express face peeling sessions and gift vouchers.
Note: Sephora defies the traditional selling methodology of most retail shops, setting out to give customers what they want: freedom, beauty and pleasure. Inter brand designed the original complete retail environment for Sephora with spatial designs, colour codes and customised concepts based on national markets.
Sephora’s retail spaces are characterised by large space, discreet sales help, alphabetical organisation and display of numerous brands and smart usage of colour: black for perfume, white for cosmetics and the red carpet to symbolise the treatment of the customer as royalty. The formula proved to be very successful and lead to a vast increase in brand recognition. The original chain of 40 stores grew to 500 stores around the world and was sold to LVMH in 1997. The first Dubai branch is supposed to open on 1st of March at The Festival City.

Email ThisBlogThis!Share to TwitterShare to FacebookShare to Pinterest
Labels: Cosmetics

I asked at the Information Counter at DFC. The entire complex is only being opened in stages. The area that Sephora is in (Sephora is ready, but the surrounding shops aren't) is due to open on 1 March... Sephora is shop number A23 on the ground floor of the Festival Waterfront Centre.

We've just had one open here (in Bahrain) what a lovely shop it is and VERY helpful assistants!!

Sephora carries Bare Escentuals make-up in the US, so hopefully it will carry it here, too! Love that store!

I found this great site with lots of weekly competitions, any anyone can easily enter.
Girl.com.au competitions